Sorry for the post delay (slacking once again).  This glorious event actually occurred on October 25, a nice cool Sunday in Southport.

I have lived at the coast for 7 years.  During that time, Bobo has been to the beach exactly ONCE.   He absolutely hated it. Bobo hates water, and he hates being on a leash when there is an obvious vast amount of land to roam.  I don’t even think he liked the sand.

Cocoa had never been to the beach at all.  She’s nearly two years old, and quite a skittish pup.  She likes water, but is scared of loud noises.  She has an aversion to any new texture under her feet (her wood deck freak-out at the inlaws’ was epic).

So, my husband and I embarked on this task thinking positive thoughts:  Maybe Bobo would like it NOW, since he was young the last time he went and now he’s older and wiser.  Maybe Cocoa would love the beach because she likes the water and loves to dig in the dirt.

Verdict is in.  They hated it.  HATED it.

Cocoa wouldn’t go near the water.  I had to drag her down to get her anywhere close, but she freaked out every time.  We even tried to trick her.  The noise was just too much.

Bobo was just pissed off the entire time.

Cocoa did, however, enjoy a few minutes of digging in the sand, once she was a safe distance from the water. 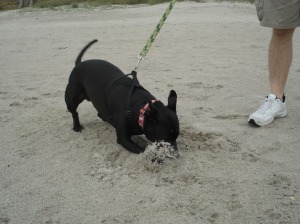 We stayed a total of 20 minutes.   So, in sum, we live near the ocean with two dogs who hate the beach.   Cross that one off…for good.