Even though we’ve lived here 2 1/2 years now, we still have some painting left to do. We finished the bulk of the house, but still had both bathroom and both spare bedrooms to paint. Thankfully, Tim knocked out the spare bathroom while he had a little vacation. The color is Behr’s Crushed Oregano, but I call it baby poop green:

We also picked out a color for the spare bedroom called Frosted Grass. It sounds green but is actually a teal blue color that matches the comforter set in that room. I’ll post pics when we get around to painting it.

The one room that hasn’t had a makeover is the master bathroom. We still use the shower curtain and bath mats I bought 8 years ago when I lived in alone in Greensboro. So, this weekend we searched until we found a new shower curtain we liked. Behold: 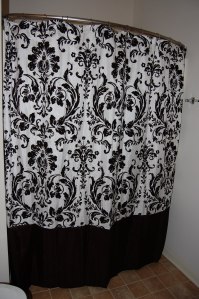 by Nicole Miller, found at Bed, Bath & Beyond. We also got these fuzzy white Nautica bath mats:

Now here’s the big question: What color should we paint the master bath? We originally wanted to do an entire black and white theme, then paint the walls red but we liked this curtain so much we went with the dark brown instead. I’m not sure red would look good with this. Maybe a pumpkin orange? Hm. I might do a poll.