Is this Ally blogging about food like she knows how to cook? Yep!

I know this concept is hilarious since cooking is not my strength, but I have been attempting to shed some weight and therefore am forced to try. Really the only type of dietary change that helps control my cravings is cutting out the sugar and cutting down on the carbs in general. In the past I’ve followed the South Beach Diet with success, but this time I’ve followed most of the basic principles without following the diet exactly. I never cut out fruit, I’ve kept in starchy veggies like carrots and I am still not eating red meat. Also, I’m not a fan of sugar substitutes so I really have only had them in smaller quantities in sugar-free jello and pudding. This time around, I haven’t been able to eat peanuts or peanut-contaminated products since we keep a peanut free house.

I’ve been at it for 2 months so far and I’m still feeling pretty good. I thought I would share some of the recipes that have turned out well and are super simple for people like me who aren’t very talented in the kitchen.

Browned 1lb lean ground turkey with olive oil, then threw it in the crockpot with 1 large chopped onion, 1 chopped green pepper, (2) 14.5oz cans of diced tomatoes (I get the no-salt ones), (2) cans kidney beans (I’ve used dark or light, reduced sodium), about 10 diced jalapeno slices from a jar, a teaspoon of minced garlic, a lot of chili powder (I use a salt-free one, can you tell I hate salt?), a lot of cumin, quite a bit of black pepper and a bit of basil and oregano even though I don’t really think that matters. I put cook it on low overnight and it’s ready in the morning to pack some up for lunch.

I’m sure you appreciate my exact measurements above. When I heat it up, I throw some shredded cheese and sour cream on top. Yum. My husband and I can usually eat this up in a few days, and I usually eat it for lunch, dinner, lunch, then dinner before I get sick of it.

Here is an old picture I took way back when I was doing Project 365: 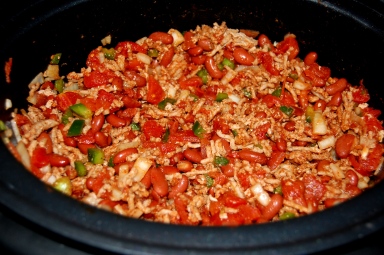