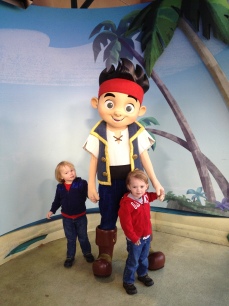 N got a wave from her and we didn’t end up waiting for her to return. We moved on to Minnie Mouse in the Magic of Disney Animation building, who had absolutely no line at all. 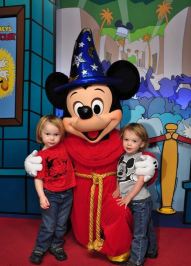 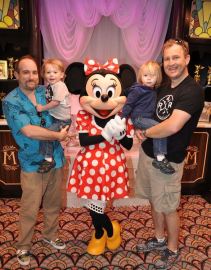 The boys were pretty neutral on this one, but wanted to check out her face. We also met up with a less-scary Mickey Mouse which was a much better experience than the Magic Kingdom version. 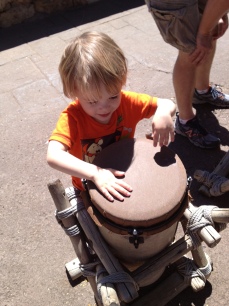 We wrapped up Hollywood Studios by grabbing some lunch, then took a bus over to Animal Kingdom for the rest of the afternoon. When we arrived, it was already fairly packed, so my BIL and husband found a FastPass kiosk to secure a time to take the Kilimanjaro Safari ride later in the afternoon. 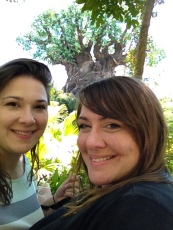 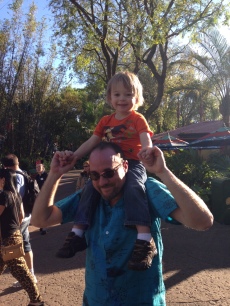 In the meantime, we checked out several shops, visited with some animals and made some music. The boys napped before the safari and we had to wake them up when our FastPass time arrived. The safari itself was fun for us, but the boys were still drowsy and only perked up when they had a good view of an animal they recognized. After the safari, it was time to head over to Tusker House, where we had reservations for dinner. I thought the food here was excellent, and once again the chef met us to discuss peanut-allergy safe options. After dinner, we decided to head out! We stayed with my sister for the rest of the trip. 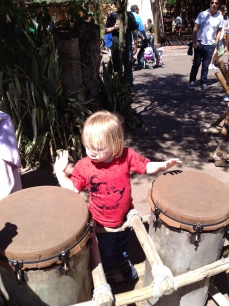 I think a three day spread would have worked a little better for this trip, just because the first day was really too long for 2 year olds. However, we did get to do and see what we intended, and the boys are still talking about visiting “Mickey’s House” a week later.

The next day, my sister and brother-in-law graciously watched the boys while Tim and I spent the morning at Islands of Adventure. If you check out my 101 in 1001, you’ll see that one of my missed goals in 2009-2010 was to visit the Harry Potter area when it opened up. This was our first visit!

We got in line well before the park opened, and when it did people went insane! We saw numerous people running toward Harry Potter, many dragging their kids behind them. We walked briskly but didn’t run 🙂 I didn’t mind a bit of a wait, and my BIL told us the quickest route straight to the main ride. 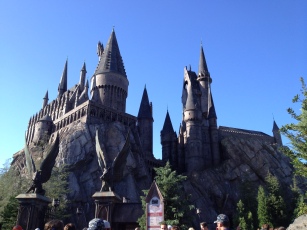 We only had about a 20-30 minute wait, which was excellent considering the wait time shortly thereafter was up to 75+ minutes. This ride was top notch, and the technology running it is amazing. As a big Harry Potter fan, everything was fascinating to me. We drank some frozen butterbeer, visited the shops and took a ride on the dragon challenge. 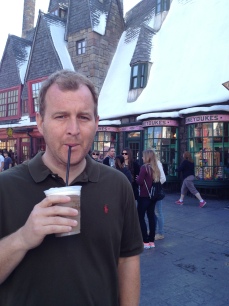 We are both usually big roller coaster fans, but we skipped The Hulk this time and rode Spiderman, since the projection had been redesigned since our last visit. We also rode Jurassic Park (still the same, still got wet) and walked around the rest of the park before leaving around lunchtime to get back to the boys. It was a really relaxing morning, just the two of us, that we usually don’t get. 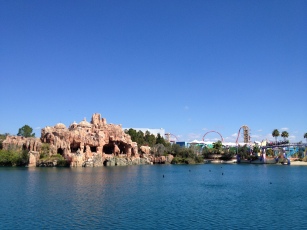 The rest of our trip was spent at my sister’s house. The boys loved her pets and I was able to enjoy a little bit of quiet time out on their tiki themed patio, complete with speciality lighting, koi pond and snuggly animals. We ended up driving straight through back to NC and even though the boys were getting sick of it by the end, they were real troopers.

We don’t have another big trip planned in the near future, but I think our next Disney trip will be longer and we’ll stay on site so we can break the days down a little more.